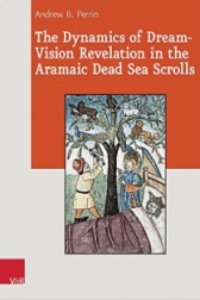 Ancient Jew Review has posted an interview I did recently with Andrew Perrin on his new book The Dynamics of Dream-Vision Revelation in the Aramaic Dead Sea Scrolls (V&R, 2015).
Here’s a portion of the interview where Andrew is explaining the topic of the book and its intersection with modern scholarship:

Highlighting the centrality of dream-visions to the thought world of the Aramaic texts was simply a departure point that lead to a host of new questions and implications. What interested me most was not just the arresting concentration of “new” revelation in the Aramaic texts, but how dream-visions were composed and what purposes they served. What we see happening in the Aramaic Dead Sea Scrolls is that dream-visions are structured and presented using what appears to be a common stock of literary features and linguistic idioms. That is, there are close similarities in form across the collection.

In tandem with this, the writers of the Aramaic texts utilized the dream-vision as a vehicle to advance or address a rather limited set of concerns: exegesis of the Hebrew Scriptures, endorsing priestly practices or theology, and as a historiographical tool for claiming that history is predetermined and directed by the God of Israel. That is, there are analogies in function across the collection. In view of these parallel findings, I conclude that the Aramaic Dead Sea Scrolls do hang together as a group, making the term “corpus” an adequate descriptor for these materials.

Throughout the interview, Andrew does a great job discussing the relevance of his work even for those outside DSS studies. You can read more in the AJR interview.

2 responses to “Andrew Perrin on the Aramaic Dead Sea Scrolls”