You can’t responsibly finish that sentence without checking a Göttingen edition. If there is no Göttingen edition for a particular book, then we usually turn to Rahlfs, but his edition was never intended to be the last word on the Old Greek (“Septuagint”) text.

This point is not widely understood, even among students at universities and seminaries: The big blue book most people think of when they hear the word “Septuagint” is primarily based on three uncials — Vaticanus, Sinaiticus, and Alexandrinus. The Göttingen volumes, however, are based on all the extant witnesses to the Old Greek translation of each book. The Göttingen Septugaint is a full scale critical edition, and Rahlfs is just a starting point for a critical edition. Rahlfs and Hanhart themselves called it a handbook or pocket edition (Handausgabe).

At the end of the day, the differences between Göttingen and Rahlfs are often few when you consider the percentage of words that differ between the two editions. Nevertheless, if you want to finish the statement “The Septuagint says …” as accurately as possible (especially if you are doing academic research) you must have access to the Göttingen volumes.

Furthermore, the Old Greek translation of Job is significantly different than the form of Job we see in our Hebrew Bibles and English translations. Claude Cox states,

The translator, in a brilliant way, gives us an edited version of the story of Job; the text is reworked to such an extent that we might say he adopts the stance of an epitomiser, commentator, interpreter. (Claude Cox, “Job.” In T&T Clark Companion to the Septuagint, ed. James K. Aitken. Bloomsbury, 2015)

To support a statement like this concerning the how-and-why of differences between the Hebrew and Greek versions of Job, it is important to work from texts based on all the available evidence, and this is what Göttingen provides.

Accordance recently released their edition of Göttingen Job, and it can be purchased as a part of a Göttingen collection ($800) or individually ($80). These prices are cheaper than buying print copies, and Accordance occasionally runs sales during which you can get the Göttingen modules even cheaper.

Using the Add Parallel button you can easily add both the first and second apparatuses to the text so that all three scroll together.

Like almost all of their original language texts, Accordance has lemmatized and morphologically tagged all the Göttingen volumes. This means you can search the text for the lexical form of a Greek word (e.g., ἔχω) and find every occurrence of the word in all its various forms (e.g., ἔχει, ἐχόμεναι, ἔχεται). 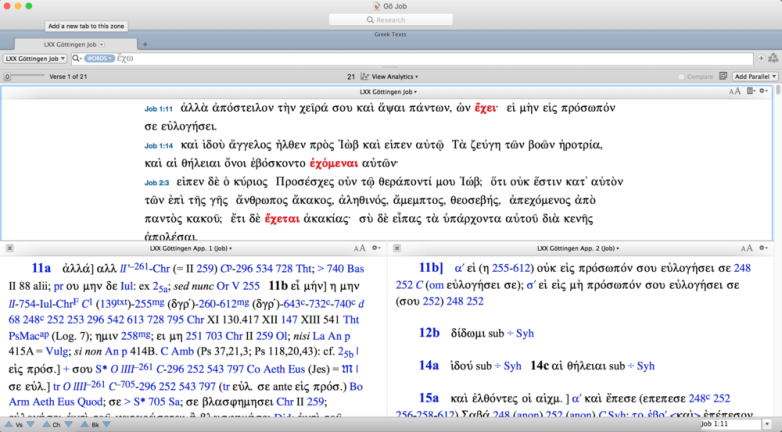 Or you can find every instance of ἔχω as a present participle by searching for the following:

Accordance has also tagged the apparatus modules so that they can be searched in unique ways.

Simply type “s” and you will see the abbreiations α´, σ´, θ´ in the word list. Select each and hit enter. To navigate within the search results to Job 1:1, simply type Job 1:1 in the navigation box at the bottom right, as you see in the picture below, and hit enter. 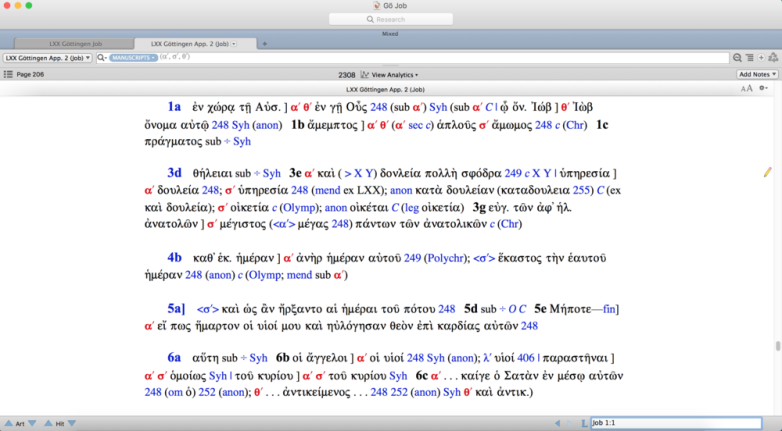 Over the course of about an hour, I checked the Accordance modules against the print edition of Göttingen Job, and I found about 10-15 typos in the digital edition. This is highly unusual for Accordance and is due, no doubt, to the fact that (1) this edition was first published in 1982, which means the initial digital text had to be produced by a scan, and (2) the Göttingen editions present any typesetter with the ultimate challenge. There is absolutely nothing like them. The number of obscure abbreviations and symbols and the combination of various langauges in these volumes is like nothing else I’ve ever seen. So the struggle is understandable.

Some of the typos I found in the Accordance modules were issues with difficult-to-reproduce characters like the μ-characters you see below. The picture below is from version 1.0 of the Accordance module, and in that version the little boxes were actually pictures. The module has already been updated to 1.1. Others were places where the scan didn’t accurately reproduce the dense notes found in the first and second apparatuses.

But in typical Accordance fashion, they have already fixed the typos I reported. Within a couple days of my reports, Accordance had already released version 1.1, which you can see below with the corrected μ-characters.

You can also check out this post where they fixed similar issues with another resource within two days of my reports. 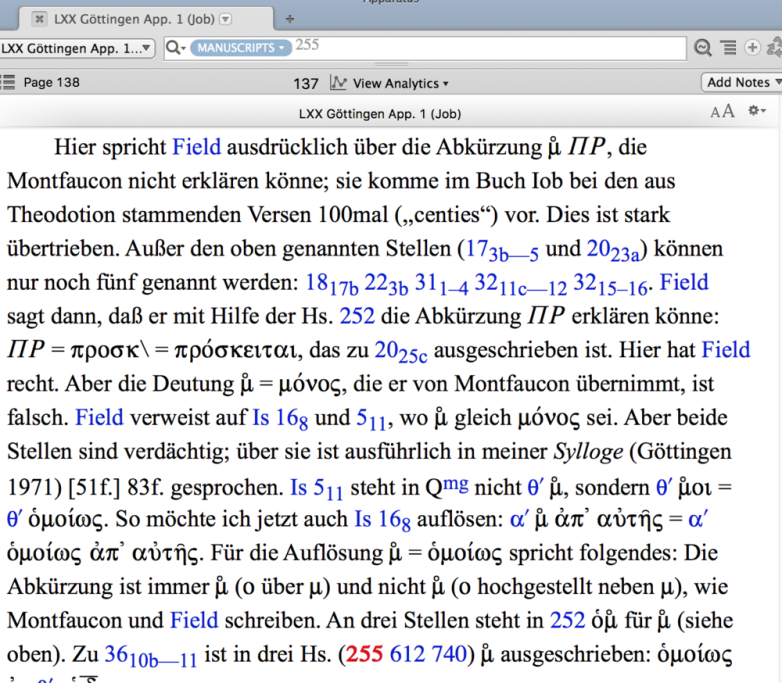 If you are serious about studying the Septuagint, the textual history of the Hebrew Bible, or the New Testament authors’ use of Scripture, the Göttingen Septuagint is essential. It is impossible to carry a shelf of Göttingen volumes with you everywhere you go, and despite the typos found in this volume and the inevitable remaining typos yet to be discovered, I think the Accordance edition is the way to go. The price, portability, search capabilities, and morphological tagging, combined with the company’s commitment to producing quality resources, make Göttingen Job in Accordance the best digital option available.